The thoroughly revised second edition of the book Orders to Nowhere is available now!  The 2014 edition contains up to day information on transition and veterans benefits as of December 2013.  It is available in print by following the link below or on the sidebar. 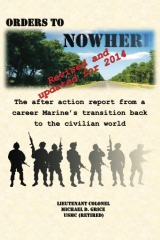 For those of you who purchased the first edition, please let me send you an autographed second edition as soon as I receive the first shipment of books.  Just contact me using the form below (I have some of your names and addresses already):

Good news of the day

Bruce Willis Charity Bike Auction Raises Nearly $25,000 for Military Service Members and Their Families  (PR Newswire)  A year-long online motorcycle auction has raised nearly $25,000—monies that will go toward furthering the Boot Campaign’s dedication to cultivating awareness, promoting patriotism, and providing assistance to military, past and present, and their families.

Perception May Not Match Reality For Military Members Transitioning To Civilian Jobs, Reveals University Of Phoenix Survey  (The Street)  Military members leaving the service may end up underutilizing their skills when transitioning to civilian careers, according to a new national survey from University of Phoenix.

Air Force announces personnel reduction initiatives  (Spangdahlem.af.mil)  To the Airmen of the United States Air Force:  We are the best Air Force in the world because we attract, recruit, develop and retain Airmen with the strongest character and commitment to our core values.

Army Vet’s Film to Show Hope, Determination and Transition of Wounded Soldiers  (ABC News)  Ryan Curtis was selected among five talented veterans to produce a film for ABC’s “Home for the Holidays.

Ramsey County launches veterans court  (SFGate.com)  A new court in Ramsey County is focused on helping veterans charged with non-violent crimes get their lives back on track.

Group buries America’s unclaimed veterans, one soldier at a time  (Fox News) They served their country, but they died alone.

Wreaths to be laid at veterans’ graves  (News4Jax.com)  The gravesites of heroes buried in the Jacksonville and St. Augustine national cemeteries will not be empty this Christmas.

VA Official Outlines Progress in Reducing Claims Backlog  (Defense.gov)  A senior Veterans Affairs Department official today outlined progress made by the Veterans Benefits Administration in reducing the backlog of veterans’ disability compensation and pension claims by 36 percent since March, attributing the success to the combined impact of transformation initiatives and increased employee productivity.

Senator Questions Stats on Accuracy of VA Claims  (Military.com)  Since pressure was applied by veteran service organizations last year, the Department of Veterans Affairs has claimed that it is not only shrinking the backlog numbers but has raised the accuracy rate of the compensation claims it has completed, to where it’s now at 97 percent.

House Votes to Dig up Veteran Involved in Homicide  (Associated Press)  The House has passed legislation that instructs the Veterans Affairs Department to unearth the remains of an Army veteran buried with military honors after police said he killed an Indianapolis woman and injured three others before taking his own life.

Why Congress Should Fully Fund the VA in Advance  (DefenseOne.com)  Congress is at risk of failing America’s veterans. With single-digit days left in the year’s congressional calendar, several important pieces of legislation to the veteran community remain on the floor of each chamber awaiting a final vote.

Budget deal offers stability to Pentagon spending  (SunHerald.com)  Working-age military retirees would see fewer dollars in their federal pensions and the Pentagon would get some long-sought stability in spending under Congress’ budget deal.

If you would like to receive Transitionnews via email, just enter your preferred email address in the “Email Subscription” box on the sidebar.

Have a great day!