I recently became aware of a very interesting tool that can greatly help people with disabilities use their computers.  It is a “keyless keyboard” that provides those who can’t use conventional interface devices a tool that enables them to use the technology that we often take for granted.

Known as the orbiTouch, it is being offered free to veterans who could use it.  Giovanni Ferrara, from the company that produces the devices, contacted me to help spread the word.  Here is an extract from his email:

I am writing to you today in the hopes that you will help us spread the word about our new program to help veterans gain or regain computer access.

We are a company based in Orlando, FL that’s offering free orbiTouch ergonomic keyboards to any disabled veteran who needs one. This program is possible through the foundations with whom we work. The keyboard is very unique in that it requires no finger or wrist motion and works great for people who have the following conditions:

In general, if you have a hand issue, this keyboard will keep you connected to your computer. It’s also a keyboard that will help you:

+ Read books and news on your computer

+ Access the VA information for your benefits and prescriptions

I looked at the website, and I really think that it is a neat product.  If you are a disabled veteran who could use one, or if you know someone who is, follow this link to their website.

It is always great to hear that there are great people like Giovanni and great companies like orbiTouch that are stepping up to help our disabled veterans lead a better life!

It’s finally here!  The first edition of Orders to Nowhere is available in print.  It will be six to eight weeks before it shows up in bookstores, and a week or so before it hits Amazon.com.  If you want to avoid the wait, you can order it straight from the printer by clicking the cover: 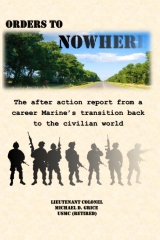 Since you are a loyal reader and follower of the blog that got it all started, you can use the discount code ZVGYFQ28 and save 10% off the cover price.

Thank each and every one of you for reading and following my journey through transition!

I left you, my constant reader, pensively hanging after my last post about my Veterans Administration physical.  How did everything turn out, you wonder?  Well, I am still wondering how it all turns out too.

The VA has become a very busy governmental agency during the last few years.  The wars in Iraq and Afghanistan have spurred the dynamic growth of all of the armed services, and now as combat in Iraq has ended and Afghanistan winds down there are many thousands and thousands of new veterans leaving the service.  The burgeoning numbers are compounded by the government’s budget deficit and military belt tightening as the growth that the Army, Navy, Air Force, Coast Guard, and Marines experienced in the latter part of the last decade retrenches and the population of the armed forces shrinks back to pre-war levels or lower.  Add all of us new veterans to those from World War II, Korea, Vietnam, Desert Storm and the Cold War and pretty soon you have a pretty huge population of veterans for the VA to oversee.

At any rate, the meteoric rise in the VA population has slowed some things down, and one of those things is the completion of the disability rating evaluation.  The disability evaluation is performed by the VA to document and, if required, compensate veterans for physical or mental conditions that were caused or aggravated by their military service.  The process is a pretty fair one but it requires the veteran to put some effort into ensuring that all of the documentation is in their record and that they attend all of the required appointments.

In my case, I initiated the process right after I checked out of the Marine Corps and started my terminal leave.  On that day I turned in all of my required files (including my original medical and dental records) and received my orders back to civilian life as well as two versions of my DD-214, known as “Member 1” and “Member 4”.  With these documents in my hands I then went to the Veterans Affairs office on base and made a walk-in appointment to see what to do next.

After waiting about a half hour to see a counselor, I went in and professed my utter ignorance of what to do and laid myself before the mercy of the VA.  Fortunately, the lady who took my case had seen plenty of knuckleheads like me before and she professionally ran me through the requirements.

I handed it over.  Well, actually I handed her a copy.  The original is probably the most important document you will receive during your transition because it is the only universally recognized form of proof that you served in the military, and it is your ticket to the dance that is the VA.  As an aside, when you check out make sure to ask for a half dozen or so “Certified True Copies” of your form because some agencies will not accept a FAX or photocopy.  The admin shop will make copies and stamp them as certified, which will come in handy later.  Trust me.

“Do you have your medical record?”

I patted the thick folder on my lap.

“Have you been pre-screened?”

I explained that my record had been evaluated by the Disabled American Veterans counselors during my Transition Assistance Class, and I showed her the form that they filled out.

I told her that my last day was New Year’s Eve, and she paused.  In a speech that she had obviously given hundreds of times before she explained how the timeline for VA claims works.  It is important to file at the right time, she said, because depending on when a vet files has a tremendous impact on how quickly the case will be evaluated.  Based on your EAS if you file too early, your package gets sent off to a regional evaluation center and it may take up to a year to get evaluated.  In my case, since I was three months from my EAS I fell into the “too early” category.  If you file too late your package gets sent off to the same place and it will likely take a year.  Too late is defined as after your EAS.  She explained that if you submit your claim 60 days or less before your EAS then your case will be evaluated by the local VA office, and that the turnaround rate is about four months.

A month later I was sitting across the same desk from the same nice lady.  Since I was now in the “sweet spot” of claim submission I presented her with all of my information and got started.

Here is what she needed to get initiate the claim:

1.)  Photocopy of my medical and dental record.  These accompany your claim during the evaluation, and you will eventually get these back.

2.)  Copy of the pre-screening checklist that was performed at the Transition Assistance Class.

3.)  Copy of your DD-214.  Not just any copy, mind you, but the “Member 4” copy.  Why do I know this?  Because I submitted the wrong one, of course, and had to resubmit the correct one a month later (which slowed down my claim).

With the thick packet in front of her she began making some phone calls.  Although I had completed my military physicals I now had to have my VA evaluations completed.  After ten minutes or so of coordinating dates and times, she handed me three appointment reminders for the three evaluations that I would need to complete in order for my case to be adjudicated.

These three appointments were totally on me.  I was required not just to show up, but to complete the pre-appointment paperwork, which was basically a questionnaire that asked about each and every item that I had identified as a malady or injury that was incurred during my service.  Things like a dislocated shoulder (When did it happen? How?) to a broken ankle (what treatment did you receive?  Any surgery?).  The paperwork was a little daunting, but without it your claim will not see the light of day.

Anyhow, I made it through all three appointments, and by the time my EAS came and went my claim was wending itself through the local VA office.  It has been about four months now, and I have been eager to see what the result will be….

…and yesterday I got a letter in the mail from the VA.  Wow, I thought, she was right!  Less than four months and I got my results.  Sweet!  Smugly I opened the letter.

Not so smugly I read what it said.  “Dear Michael,”  it read, “we are sorry to inform you that your case is still under review….”  D’oh.  It looks like I still have a month to go, but that’s OK.  The good thing about being retired is that time is not necessarily one of my problems.  I can wait.

1.)  Talk to a VA counselor as soon as you can.  Make an appointment while you are still on active duty if you can, because even if they can’t help you until you go on terminal leave they can explain the processes and procedures that you will need to follow to obtain evaluations and benefits.

2.)  Schedule a meeting immediately after going on terminal leave.  You can officially start your evaluations and benefits requests when you have your DD-214 and final orders.  It really behooves you to start as early as you can because the VA is a bit overwhelmed with the huge number of new veterans applying for benefits.  If you wait all you do is compound the problem.  It is a first in, first out system that is irrespective of military rank or position.  Don’t think that your uniformed high ranking muckety-muck status means anything to the VA because it doesn’t.

3.)  Get as many “certified true copies” of your DD-214 as possible.  I have had to give out several so far, and it is easy to get them when you check out.  Much less easy later, trust me.

4.)  Make sure to provide the correct documentation to the VA.  It cost me a month because I submitted a “Member 1” vice a “Member 4” DD-214 with my claim.  What’s the difference?  As far as I can tell there is one additional block of information on the “Member 4” version.  Apparently it is a pretty important block!